The American Psychological Association (APA) has very strict guidelines on how manuscripts are written and formatted. These requirements are described in the Publication Manual of the American Psychological Association, also known as the APA Manual. To avoid confusion, APA follows the conventional format for legal citations which is a little different from what you will see in APA 6th. An important part of the APA style is formatting of citations and the references list which is described in some 50-plus pages of the APA manual.

While many writers do spend considerable time both learning and formatting their manuscripts, usually in Word, to meet APA's guidelines, LaTeX users are usually at ease and more focused on writing as LaTeX separates formatting from content; one of the advantages of LaTeX. Formatting and typesetting rules are handled by the apa6 package by Brian D. Beitzel. While this class file handles document formatting, it does not handle the formatting of citations and references. For that you need the apacite by Erik Meijer. As the format for citing a legal case is a little different, we can use the @literal type to get the desired format. To properly use this type it helps knowing the rules for citing legal cases.

Unlike the standard bibliography entry, you do not need to know an author's name to write a basic reference for a court decision but there is some information that is needed as APA follows the conventional format for legal citations. Most court decisions contain three basic elements: 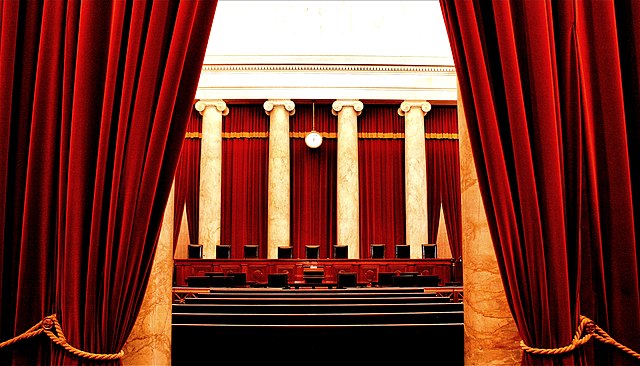 The inside of the United States Supreme Court. In the photo are the nine chairs of the Supreme Court Justices.

A reference should start with the name of the case and in most cases this is the name of the parties involved. The word versus is abbreviated as "v." instead of the usual "vs." A well known case is Brown v. Board of Education. Here are a few other examples: 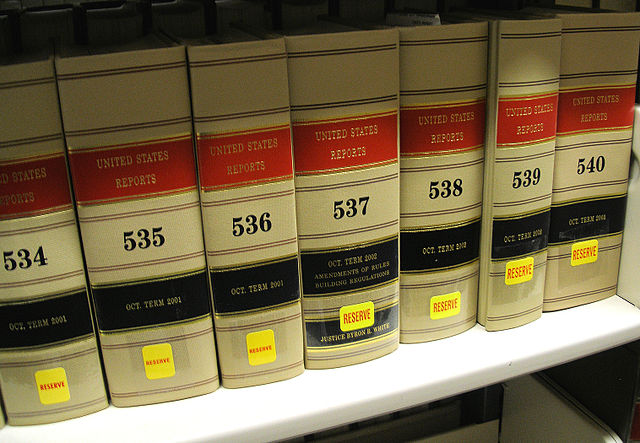 The United States Reports, the official reporter of the Supreme Court of the United States. Taken by user Coolcaesar for the English Wikipedia at a public law library in San Jose, California on July 7, 2006.

Court decisions are bound in volumes called case reports. This makes the second element of our APA legal reference. Here things are quite different from what you typically see with the usual APA reference as it is more convenient to present information in the conventional format of legal citations. The decision is written as the volume, followed by the reporter, and then the first page number of the case.

We see above how court decisions are reported. In the case of Brown v. Board of Education, putting the two elements together become


Brown v. Education, 347 U.S. 483
But our reference is not complete. We need to finish our decision with a date and possibly the court's geographical decision.

Court and Date of Decision

We generally expect the year to come after the author and, in the case for legal citations, the same should apply for a court case but it does not. For the final part of our reference, we place the geographical jurisdiction (if needed) and year in parentheses. This looks something like:

Putting it all together

Now that we have a very basic idea how court cases are cited we can use this to cite cases using the apacite package. Unfortunately, the apacite package does not specifically support citing legal references but we can use the @literal type, as package author Meijer suggests, to get things looking right. You will need four fields in the literal type to get things looking right: text, key, firstkey, and year. As the citations are not generated automatically as we are accustomed, we need to use what we know above to help BibTeX along the way. Below we will look at some of the keys we need as well as how they are used.

The text key is used in the literal type and typesets the complete text as-is. This is the text that appear in our list of references.

The firstkey key appears in all the BibTeX types used in the apacite package but more specifically, it is used as the author in parenthetical citations. In this case, it would be the name of the court case in italics.

This is another key that appears in all the BibTeX types but its use is somewhat different. The information here is what appears in the textual citation. Again, this is also going to be the court case. So why two separate keys to say basically the same thing? Well, the main reason has to do with the intricacies of APA. The APA manual requires abbreviations if certain titles are too long when making an in-text citation and this key allows you to do this. We don't need to abbreviate anything in this case so it remains the same as the first key which is the court case, again in italics.

The text key is where we put everything as we would like it to appear in the list of references as we have seen above when discussing the requirements for legal cases citing APA.

Here we use some of the natbib commands.

and get the final output:

An example of citing court cases in LaTeX and using the apacite package.

And there you have it. Citing court cases in APA using the apacite package is (relatively) simple.